This is, by far, the worst book that I least like that I've read this year. I've been racking my brain for things to say about it but I can't, because nothing happens in it. Nothing. 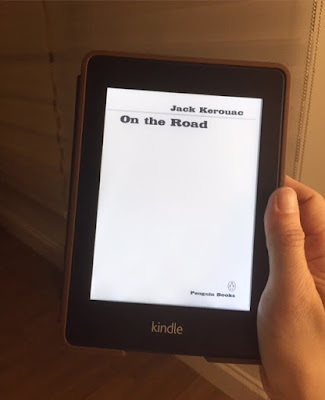 There's just a bunch of guys who go on a road trip across the country. I don't understand why. Sal Paradise, the protagonist, decides to go from West Coast to East Coast, running out of money in the process and needing to be bailed out by a relative, and then when he's there, he goes back again. Dean Moriarty, his "friend," is his companion who cannot, for the life of me, decide who between two women he'd rather be with. Both of them waste waaaay too much time traveling and driving and that is all there is to this book, really.


It took all my will power not to abandon it because hey, I've wasted far too much time reading it already, I might as well get it over with. Finishing it will also earn me another square for my bingo card, so there you go.

I don't care that this work was published during the Beat revolution, or written by one of the writers of the Beat generation. It doesn't matter and it doesn't change the fact that I did not care nor appreciate this book. Because it sucks.

Angus Miranda said…
Truman Capote said that the novel is typing, not writing. Not excited to read this.
July 4, 2016 at 1:43 PM

Lynai said…
Oh. I'm thinking of reading this book for the travel writing Bingo square but now I'm having second thoughts. Glad to have read your review before I bought a copy, haha! So now I have to look for another book. :D
August 15, 2016 at 2:59 PM