The Rest of Us Just Live Here

Now flip the coin and imagine the "regular" kids, the "ordinary" ones who have neither special talents nor cool powers, the kids who can't even begin to save themselves from themselves.

This is their story. 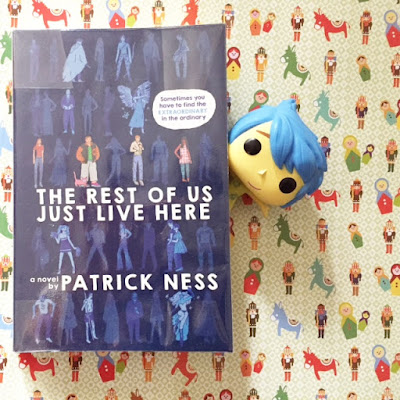 I have no problem with the concept, and because Patrick Ness is a hit or a miss with me ("Knife" was a sore miss, "Monster Calls" was a perfect hit), I was hoping that the scales would tilt to the "hit" side. I enjoy reading YA every so often and thought this would be one of those books I'd like. Guess I spoke too soon.

The thing is, nothing happens in this book. I get that Mikey, Henna, Meredith, and the rest of their posse are the "ordinary" kids, but I didn't count on the ho-humming after every page I read. The perspective was interesting because the reader is shown the less popular side of high school, but for whatever reason, something just didn't click with me.

To spruce things up a bit, our group of kids were endowed with "special" traits. Mikey was battling with his obsessive-compulsive behavior. His older sister Meredith, who was held back a year and would graduate with him, is an anorexic. Their mother, a local politician, is saddled with the problem of their alcoholic father, who contributes nothing in the grand scheme of things. To top it all off, Mikey is secretly pining for his classmate Henna, whose family is set to relocate to some far-flung war-torn country soon, putting on the pressure for Mikey to express his feelings even more. It would seem like the only "normal" member of Mikey's family is their youngest sister, who just wants to go to a concert like any normal kid.

Oh, did I mention that Mikey's best friend, Jared, is a, urhm, god of cats and is being worshiped by all manner of cats, e.g., mountain lions? For a novel that's supposed to focus on the "less popular," ordinary kids, Jared's strange character seems to me to be a little out of place. Ness acknowledges this, though, and one of the characters points this out near the end. But by then, the plot was already lost on me.