Bel Canto is a story about human relationships, notwithstanding differences in race, upbringing, and stations in life. It was heartwarming and heartbreaking as well, and the sadness of how it all ended up left me feeling mixed-up inside. 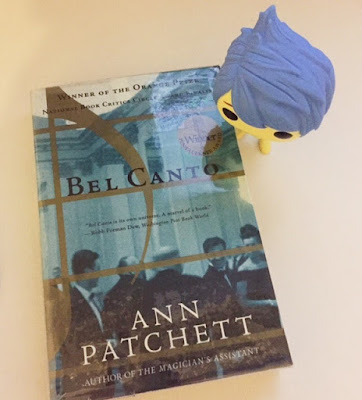 It begins with a dinner party in honor of world-renowned Japanese businessman Katsumi Hosokawa, hosted by the President of a small, unnamed country in South America. The party - held on the day of Hosokawa's birthday - was held at the official residence of the Vice President of that country, with statesmen, VIPs, and international personalities from various fields in attendance. Famous soprano, Roxane Coss, was the special guest of honor, invited because she is Hosokawa's favorite opera singer. Unfortunately, the President himself was unable to attend, and the Vice President - his name is Ruben Iglesias - was host.

In the middle of the revelry, armed men and women - some of them barely out of their teens, a few were actually children - barge into the mansion. They've been planning on taking the President for weeks, and just a few hours before the party, had been hiding inside the mansion's air vents. But because they were not counting on the President to be absent at the dinner party that he himself had staged, the terrorists, in an impromptu resolution, decide to take everyone in the mansion hostage until such time that they had a backup plan concocted. This is where the story unfolds.

One will appreciate the beauty of this novel if, like the story itself, it is taken in slowly. The hostage situation inside Ruben Iglesias' mansion would take weeks, and one can only imagine the tedium and tension inside, with hostages and captors commingled. Because the dinner party visitors consisted of a blend of nationalities - Italian, Russian, French, Japanese, Spanish, etc. - there was difficulty communicating. Fortunately, Hosokawa's translator, Gen, was well-versed in almost all major languages, and served as everyone's translator, but mostly the terrorists. The siege should, as one would expect, take its toll on the hostages, and it was understandable if any one of them would hatch a plan of escape.

The terrorists attempt negotiations with the government through its Swiss emissary, a representative from the Red Cross named Joachim Messner, but all he really does is deliver food and other necessities demanded by the terrorists for the hostages' sustenance. Because they were provided for in terms of daily needs, the hostages decide to wait the whole drama out, and, in the course of the long wait and despite the language barrier, form relationships between and among themselves.

Most significant of these relationships are those between Roxanne Coss and Hosokawa, Gen and Carmen, one of the teenage members of the terrorist group, and Ruben Iglesias and young Isaias, another child member of the terrorist group. These people form a strong bond between them, rising above the hostage-captor situation, and connecting with each other in a manner that transcends language, nationality, and status in life. What happens to these people and these relationships when the siege is over?

The solemnity of the prose fit the novel well, and despite the rather slow start, it gradually grew on me. The epilogue was very bittersweet; it wasn't the ending that I expected, but it was a good one, giving everyone what they deserved. I will definitely read more Ann Patchett in the future.

“It makes you wonder. All the brilliant things we might have done with our lives if only we suspected we knew how.”