Earlier, I was looking for my MIBF post for 2015 – I always write about my “loot” just like everyone else – and realized that I never got around to posting one. The last MIBF post I wrote was in 2014. As the most recent MIBF just wrapped up over the weekend, I thought it might not be too late to catch up (yeah, it’s a year later, so what).

MIBF 2015
Last year, I went by my lonesome, as I usually do, and on a weekday. (It’s important to stress the day of an MIBF visit because it will save your life. Heh.) I made a beeline for the Adarna booth because I wanted to get a LOT of books for my daughter, and I also had the idea of getting duplicate copies for giving away to her classmates on Christmas. The Adarna dual language books are my favorite local children’s books and I always make sure to get Allie the new ones.

Scouring the shelves, I saw that we already had several of the titles, but there were still a lot of new ones that we didn’t have yet. So these are what I got for her: 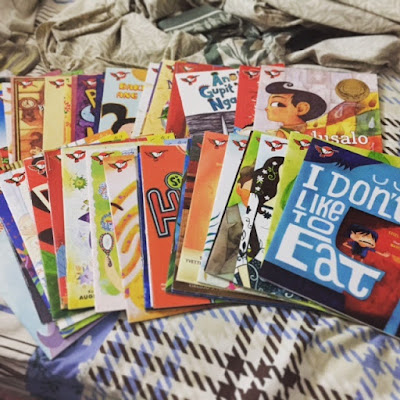 That’s 45 storybooks for Allie, and another 20-something books to be given away for Christmas. I’m happy to say that, one year later, we’ve read every single one of them.

I remember having the pleasure of walking around SMX then, browsing shelves and checking out stuff on sale despite the very heavy bags I lugged around. There were relatively few people because it’s a weekday, and the crowd was manageable. I say this because…

MIBF 2016
… this year’s MIBF visit was not a very enjoyable experience. First, I had no choice but to go on a Sunday because (1) I live far from the venue now, unlike the previous years when I lived just practically a stone’s throw away, and (2) going there after office hours would mean I’d be late getting home, and I don’t want that. What’s the problem with going on Sunday? It’s the last day of the fair, which means it’s the last chance to avail of the discounts and freebies, and everyone – and I mean everyone – was there. Plus, ugh, hellish traffic. It didn’t help that SM was simultaneously having a sale.

Second, I had my little girl with me, because we couldn’t leave her at home after a few days of battling with fever, cough, and colds. (She’s still recovering, actually.) And because she was with me, we couldn’t stay long inside the venue lest she be unnecessarily exposed to more germs, because whoa, you should have seen the people inside. It was crazy in there. Long queues, crowded booths, poor air-conditioning because of the thick crowds. Much as I’d love to go around and browse, it wasn’t really a good idea.

And so I have no “loot” this year, and by that I mean a huge stack of books that I managed to score from the book fair, whether for me or for Allie. BUT before we completely bailed, we did get these: 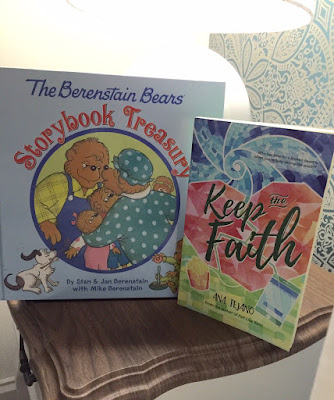 Allie loves The Berenstain Bears - she has around 50+ books featuring the Bear family - so when she saw this Storybook Treasury at the NBS booth, she grabbed it right away. She also got an "I Can Read" Doc McStuffins book with that (which I could not find at the moment). And for me? My lone purchase was Keep The Faith by Ana Tejano, my good friend-from-the-book-club-turned-romance-writer! This is her second outing after Fall Like Rain, and I'm happy that her writing career is doing well.

So that was two years’ worth of MIBF stuff in one post, haha. Until the next MIBF, and I will NOT go on a weekend again. If I can help it.*insert laughing-crying emoji here*