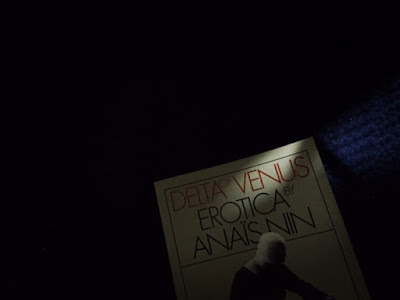 Reading erotica is an effortless exercise, I daresay. Plot-wise, you won't have difficulty deconstructing because, well, there isn't any to deconstruct. There's a snippet from Nin's diary on the front pages of the book that explains this lack. Nin and her contemporaries, like Henry Miller, wrote erotic stories for a fee (a dollar a page, I think? I forget), courtesy of a well-to-do collector who wished to remain anonymous. The mystery collector had an agent who collected the manuscripts and paid them their fees. The collector, however, required Nin and the others to cut down on the poetry and concentrate on the sex.

The stories in Delta of Venus were among many that Nin had written and sent to the collector for a fee. From the writing, it can be easily deciphered how Nin made an effort to make them bereft of "poetry" and focus more on the sexual acts. The result was that the stories were plot-less and shallow, like something one would read to be aroused or sexually excited. Like a meaningless conversation, perhaps?

And then one of my reader friends points out, citing another reviewer of the book, that the object of erotica is not for sexual arousal but for breaking down and exploring taboos. From that perspective, then, I would concede that Delta of Venus works. But that is all.