I read A Single Man based on good reviews from friends, and as the first book for a reading challenge/team bingo that I joined over at the book club this year. I was expecting that it would be similar to Andre Aciman's underrated novel, Call Me By Your Name, but A Single Man was a gem all on its own. 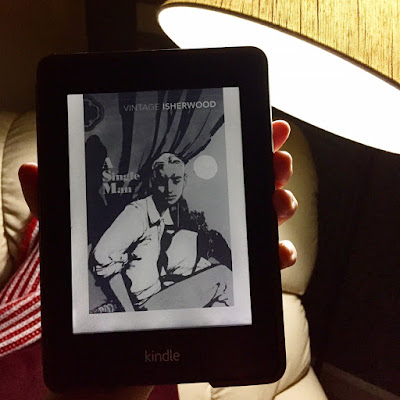 The story of A Single Man runs through an entire day in the life of George Falconer, a middle-aged professor in a California university whose partner, Jim, recently died in a car accident while visiting family in Ohio. Jim’s family, apparently, are not aware of his relationship with George, and George merely learns about his death through a cousin’s phone call. George is not invited to the funeral service, and so he is left to cope with the loss on his own.

It isn’t easy. He’d been with Jim for 16 years. Can you imagine being with someone that long, only for that person to be suddenly taken away from you, without even the opportunity for a last goodbye? Clearly, George is brokenhearted, and on the day subject of the novel, he goes through the motions of his everyday life: waking up, performing his morning rituals, contemplating the neighbors, driving to university, teaching, etc. What’s different about this day is that he has dinner at the home of one of his oldest and closest friends, Charlotte, and one of his students, Kenny, apparently seeks him out and (I gather from my reading) tries to seduce him. Everything else that happens in between, you have to find out for yourself.

I loved George. He was smart, not just intelligent in a scholarly, professorial way. He knew propriety and observed it: he acknowledged where and how things should be, and was careful not to violate or contradict. He thinks logically and refuses to give in to whims or caprices – save, perhaps, for moments when his mind would be muddled with alcohol, but even then, he still maintains his composure. His only fault, as I saw it, was that his life revolved wholly and completely around Jim, so much that when Jim died, he lost his footing and did not know how to go on. But who can blame him, for loving that much?

I loved the writing. It was fluid, simple but elegant. One would think that a day in the life of an old gay professor trying to cope with the loss of a partner would be tedious or boring, but it was very compelling. The narrative was continuous but it flowed effortlessly; I felt that George’s day needed to be told in one go. As I was reading I felt like I was watching George go through his day slowly, observing his actions from afar. And at the end of his day, ah. I should stop right here.

"But now isn’t simply now. Now is also a cold reminder: one whole day later than yesterday, one year later than last year. Every now is labeled with its date, rendering all past nows obsolete, until — later of sooner — perhaps — no, not perhaps — quite certainly: it will come."


Also: watch the movie adaptation starring Colin Firth and Julianne Moore. It is wonderful and heartbreaking.