I met Adam Johnson last year on my first Philippine Readers and Writers Festival, an event I attended with my good friend Benny. Prior to that day, I only knew Adam Johnson as the author of The Orphan Master's Son, a Pulitzer winner, which I haven't read yet (at the time). After meeting him, I discovered that he has a good sense of humor, he is over six feet tall, he actually flew to North Korea for the purpose of gathering material for his Pulitzer-winning novel, and he is a friendly, good-natured guy, you will feel at ease talking to him.

But that isn't why I loved The Orphan Master's Son. Really. 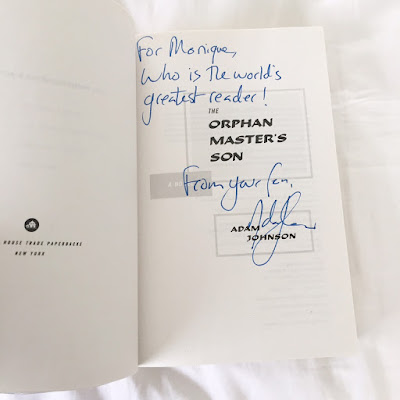 Pak Jun Do's father runs Long Tomorrows, an orphanage outside Pyongyang. Although he is not an orphan, he might as well be, as far as everyone else is concerned. Living among his father's wards and exercising authority over them elevate him from the ranks until he is "recruited" by Pyongyang as a professional kidnapper, abducting Japanese citizens and bringing them back to North Korea for whatever purpose they may serve. Later, Pak Jun Do embarks on other roles until finally, he assumes the personality of Commander Ga, once the most loyal subject of Kim Jong Il and the husband of the actress Sun Moon, the woman he loves.

This is the first historical novel I've read about North Korea, and to say that it is both fascinating and horrifying is an understatement. I've heard stories about the kidnappings, the indoctrination, the culture and the way of life in North Korea, and this novel affirms everything.

Pak Jun Do's story is one of survival. It's sad because his loyalty and perseverance were not rewarded; instead, it almost cost his life. From childhood, he had done everything he had been bidden to do - not that he had any choice. As with all other citizens of North Korea, Jun Do's future has been determined for him.

But he is, at the end of the day, only human. A human who feels love, and despair, and the will to survive. A human who values freedom and sacrifice and the sanctity of life.

Highly recommended, this one. And I don't usually give recommendations.

"To keep someone alive, you put them inside you, you put their face on your heart. Then, no matter where you are, they're always with you because they're a part of you."