My old (paid) template went all bonkers, for whatever reason, so I had to get another one because, despite the latest post being three months old, the blog was an eyesore. So here's yet another new look, with the flowers and blue sidebars. What do you think? Fancy, eh?

On the reading front, I'm doing not so good but not so bad, either. Still acquiring more books than I could read but I've long given up trying to whittle down the TBR to a manageable number. But hey, remember the January post where I said I'll be having a new bingo challenge with some friends? Here's an update: 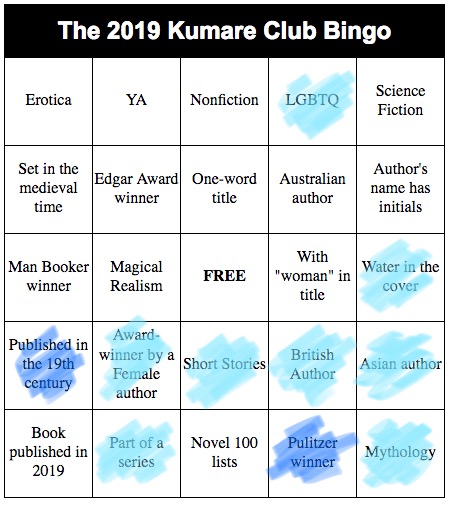 Got a bingo! Here's the list of books so far:

For the 1st bingo pattern:
Published in the 19th century - "Twenty Thousand Leagues Under the Sea" by Jules Verne
Award-winner by a Female Author - "Eleanor Oliphant is Completely Fine" by Gale Honeyman
Short Stories - "The Lottery and Other Stories" by Shirley Jackson
British Author - "The Buried Giant" by Kazuo Ishiguro
Asian Author - "Nightfall" by Eliza Victoria

And for the scattered squares:
LGBTQ - "The Song of Achilles" by Madeline Miller
Water in the cover - "The Beach" by Alex Garland
Part of a series - "The Fifth Season" by N.K. Jemisin
Pulitzer winner - "Less" by Andrew Sean Greer
Mythology - "Circe" by Madeline Miller

I'm currently on to the Science Fiction square, reading "Slaughterhouse Five" by Kurt Vonnegut. Will try to get that next pattern next time! :)
Email Post